Europe is getting completely mad with its „denazification“ hysteria. Even the common and simple actions of people who are trying to preserve national dignity meet brutal persecution of “greens”, socialists, politically correct dummies, and of course red subhumans who feel there like at home. Russian neo-bolshevism meets no slightest resistance in all those countries, so obsessed with “prevention of totalitarian tendencies”. All animals are equal, but pigs apparently have become more equal again.

Through more than 60 years, generations of russian eternal commies are connected by the single thing: filthy, hideous essence of red subhuman, which remains permanent in contrast to fading spirit of Western pride and force.

HERE one can see a gruesome creature. A female untermensch, or unterfrau. A monster at commies’ service, with predatory lust for torture and murder. Being a member of criminal organization named SMERSH and having direct responsibility for red terror as well as soviet war crimes, she is retired and lives the rest of her unholy life in impunity, boasting with her own crimes.

Just like the commie asshole in THIS video. Grinning in his overblown feeling of impunity, he is bragging with atrocities, looting, rapes and murder he and his red comrades committed upon civilians.

Those two cases were taken as example from countless others. Many thousands of russian bolshevik subhumans are still alive and boast with their “glorious” deeds drunk with vodka at May 9. In the neo-soviet Russia this scum is honored as “heroes” and “veterans” – the most known example is a red murderer named Vasily Kononov, personal pet of KGB kingpin Putin.

Let us look at the modern reality, what the descendants of criminals, murderers and rapists are doing now and how they are being treated in “civilized” countries.

HERE and HERE are dirty untermensch offspring in Latvia celebrating their bolshevik unholy day. Those drunken red subhumans are shouting bolshevik slogans and carousing, by their national tradition having drunk ride.

They are unable even to walk like people, but they bought licenses for bribes and now abusing rights which honest people must fight for, because of russian corruption and EU “laws” which mock law-abiding people.

The more rights russians bribe out, the less of freedom people have!

A VIDEO about russian KGB-hired journalist pretending to be independent, activists of neo-bolshevik red horde and russian subhumans in action. Those scum riots were praised by russian media, while ass-licking Estonia labeled as “Nazi” state by neo-bolsheviks.

World community is silent about russian neo-soviets rampage, but they are highly bothered with “gay rights” and supplies for parasites from East!

As conclusion, HERE is a newsreel made by pro-russian whelps, praising corruption and poisoning of Germany by red subhumans, showing growth of russian-infested abominations in once great country. Broadcaster sounds like submissive russian-addicted queer who had his… “pleasure” right before the footage.

Wach auf, Europa! Wake up, or soon you will be meeting your new master – 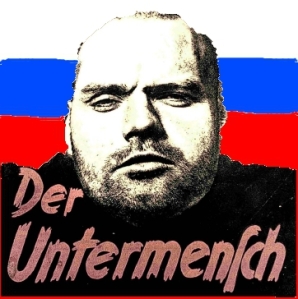