Turning themselves inside out in neo-soviet frenzy, russian patriots published so-called “Polite primer”. There, “A” is for Anti-Maidan, “Б“ is for Berkut… of course, “П” is for KGB asshole Putin (who, with his perverted addiction to certain body parts of his little slaves, will be definitely pleased), “Т” for “Topol” missile and “Ы” is for annexed Crimea. (Don’t wonder why. Russian logic always was a disaster). 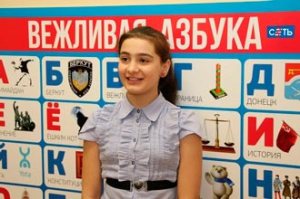 VIDEO of the lesson is for those who still don’t believe.

“Ruskies! The main letter should be L (“Л”) for Licking. And keep telling it’s good for administration and government arse. The rest, like Lies, Vile deeds, Hate and other russian features will go by itself. You have it perfected by generations.” (IPVNews.org caption)

Now, even imbecile products of traditional russian drunk conception (who had already become majority in russian schools) won’t be able to make a mistake. Everyone will successfully complete the transformation into adult untermensch to have a joy only russian patriots can have!