Descendants of bolshevik comissars have a predatory lust for human flesh, as well as their ancestors, criminals rotten to the bone. Outrageous results of journalist investigation (led by Anna Politkovskaya) in Checnya revealed confirmed case of it. “Glorious” russian officer bit off soldier’s ear for refusal to follow criminal orders, and this is definitely not some single exception – but murder of Politkovskaya by red brutes and Kadyrov’s KGB regime in Chechnya halted most of investigations.

If those red cannibal subhumans become some high officials in neo-communism system they openly demonstrate their brutal favors. In private conversation with colleagues, press secretary of KGB dictator Putin, Dmitriy Peskov, said: “for wounded OMON policeman, liver of meeting participants must be splashed over the asphalt”.

Later this bloody lackey of dictator tried to use favorite russian saying of small-time tzars: „I am boss, you are fool. You are boss, I am fool.“

Only complete fool is able to believe bulsh#t he said afterwards. That bolshevik spawn claimed to have tough conversation between “two men”, and revealing of it “not in man style”.

Everybody knows that neo-soviet Russia is not a Wild West. If somebody wants to speak tough about KGB dictator and his whelps, he (or she) will find himself in prison or six feet under very soon. While a slightest disagreement is punished with all brutal power of neo-soviet machine, “licensed lackeys” like “nashi”, “rumol”, russian bikers and all kinds of scum holding power of KGB regime feel free to do everything they want, absolutely sure in their untouchable unholy essence.

In Russia it is damn easy for some brute to become a tzar – legacy of flesh-lusty red comissars lives forever there.

After some silence I continue regular events overview.

Most of russian population is so pro-soviet that it voluntary resurrects this brutal, criminal and sub-human regime as well as its attributes. One of thoseis 1st of May “spring and labor day” with mass meetings, drinking and praising of repressive power as well as its leaders. With the returning of KGB dictator, this process is going even faster.

Here are photo materials from the unholy event (source of photos: “RIA novosti”). 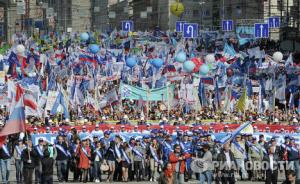 Nationwide youth support of neo-bolshevik system. A horde of neo-communist “united russia” young henchmen, who are always ready to fight against “others”. In 10:1 ratio.

For most of russians as well as in USSR, politics are beyond understanding. Who gives them vodka is their national hero. Watch drunken untermenschen carousing and yelling, joyful with their low existence.

Watch at the slogan those russians carry. If you know russian language and history, you will notice evident bolshevik legacy. If not, just look at revolting faces of those unterfrauen.

As usual, neo-soviet hypocrisy. Their slogans say “united russia –  high living standards”. They forgot to add: “for those who are licking KGB dictator ass only. Others will be bashed at heads by cudgel”.

At the day of drunken proletarians, russian dictator Putin decided to show how he is close to his nation. He did not only give it extra days for drinking. He went for demonstration himself and afterwards paid a showoff visit to some pub, where he was drinking “Zhigulevskoye” beer with his puppet sidekick Medvedev (and a horde of security which cleared the area before dictator arrived, so local lowlifes had to seek other place for drinking up).

A historical note for those who do not know the fact. “Zhigulevskoye” beer is one which was popular in USSR amongst proletarians and lowest social groups. It was the cheapest and most mass-produced kind of soviet beer. What is about its taste, no civilized man can endure it.

This was about neo-bolshevik horde. Now look at their political ancestry.

Because communist scum is a main source of modern neo-communist russian population, no one persecutes them no matter what they do.

The only thing “united russia” and communists are fighting about is votes.

Yes, civilized world, note all this is not USSR. And if you won’t take action, neo-Gulags are waiting for you. Maybe under 3-colored flags instead of red ones, but with all features of origin.

It is not a secret that russian thug dictator Putin is tightly connected with mafia. He doesn’t even tries to conceal his sympathies to world-known criminals. Recently, while speaking about Chicago, russian dictator said:

“Yeah, it is said, good one (city). Al Capone lived there.” (Source: NEWSru.com)

U.S.A. is still not Russia, and those like Al Capone are criminals here, but if they lived in thug Putin’s neo-soviet Russia, they definitely would have been his loyal VIP sidekicks.

I won’t say too much here – History said almost everything even before those events took place.

It had been already proved more than once that dictators of russian slaves go away only six feet under. I’ll repeat: russian SLAVES, cause no free man will ever try to restore the slavery from which he had been liberated.

I won’t refer to the opposition and other official bullshit here, cause the entire russian politics, no matter of what party, provokes vomiting reflexes with its repetitions. An useless struggle of always-beaten opposition against always-winner KGB machine. Or better to say, working as speaking punching bag that is saying regular loud “Ouch, human rights violation” going on in the name of remaining “common” russians, who are too busy to be in politics with drinking up at the background.

60 years later, one can see the same thing. Or can’t – if too tolerant and politically correct. But russians admire this resemblance. Well, comrade Lenin must prepare to move a bit in his Mausoleum because his neo-communist successor Putin is not immortal.

At least there is something new in KGB PR – crying thug. With russian “unpredictable national character”, this will definitely do the trick. What’s most funny, they really will believe all this is real even being „bashed with cudgel at heads“, as the KGB asshole promised to treat his nation. But those who are dumb as those russians, will be all over the world – and this is already not funny.

Now the experiment of “puppet President” is over and the real dictator returned to place which he had to control remotely for 4 years. Those 4 years were not in vain for the brute and his horde, bringing Russia even closer to neo-Soviet regime.

Vile and brutal crimes were made against ones who barely could survive in this nightmare. Dictator, his puppet, his bunch and nationwide horde of supporters are responsible for many lives, especially young ones. For the damn “Concept of moral education of youth”, which proclaimed Goths extremists, making abuse, tortures and murder of those self-expressing young people absolutely legal. Which allowed horde of criminals to humiliate and kill them without any responsibility. Which provoked a wave of youth suicides. Now “enemies” are disappeared from streets, just vanished, like  never were there. But mr. wannabe-Stalin and his KGB bunch are so creative that they will find new enemies. Even when there will be completely no “others” left.

Soon they will begin to whomp each other, just like in infamous 1930s. This will be a thing to laugh at, when “not loyal enough” followers of neo-communism will got their torture chambers and gulags.

History goes on. But russian untermenschen do not want even to look at their own hideous reflection in the past, preserving an eternal slavery essence of themselves, doomed to exist in eternal red nightmare that they create with own hands.