Mwuhaha! Things to laugh about.

With this post, I’m proud to announce my first colored cartoon and a separate category. Don’t expect anything to be politically correct here!

The word on everyone’s lips these days seems to be “coronavirus.” And just as always, some political factions try to abuse the situation for their own profit, mostly by blaming their opponents. However, in my opinion there were much more trivial and generic reasons for this epidemic to happen.

Once the West chose an alliance with Stalin’s USSR – and now it has another incarnation of Evil Empire, a nuke-wielding terrorist state.

Now both former Eastern and Western blocs chose to become totally dependent on communist China, where concentration camps and genocide are everyday reality. Entire industries and century-old brands ceased to exist just to be replaced by cheap disposable Chinese crap, which becomes worse and worse with each new production year. As a person closely related to manufacturing, I’ve witnessed all that with disgust. Being carried out under mawkish environmentalist slogans, deindustrialization has paved the way for financial crisis, moral decay, social unrest and chaos. While worthy people who have brains to think and hands to work are forced out of this life, libtard good-for-nothing parasites are feasting on taxpayers’ money, pretending they are the smartest ones. Pollution has become a disaster, cause no one cares how Chicoms recycle their waste. Or better to say, how they dump it into the world ocean and atmosphere.

And here comes the expected result, another kinda undocumented “bonus” of living in the world of things made in China – a deadly epidemics made in China.

Nothing good can come out of friendship with tyrannical state that abuses their own citizens. People, let alone different nations and countries, are NOT equal. It has been told long ago, one man’s trash is another man’s treasure. And vise verse, I should add.

The COVID-19 leakage seems to be a consequence of another commie bioweapon experiment. Perhaps a sample was intended for delivery to some Western country but some drunk Chicom smashed the package. Or perhaps it was a plan to start the entire mess in Wuhan. It will be never known.

What is known for sure here is that countries like China, Russia, North Korea etc. can afford themselves to lose several millions of population just while playing with their tyrants’ deadly toys, let alone in wars for world domination. Russia has nuked their own soldiers and citizens during Totskoye range exercises; the policy of their leaders has been openly declared by bloody commie thug Zhukov: “We shouldn’t pity our soldiers, women gonna give birth to more!” And do you seriously think that modern ruskies who praise Zhukov and Stalin, let alone Chicoms with about 1.500 millions of traditionally-expendable population have better respect for human life?

What’s next? A chemical plant failure, nuclear facility meltdown, or maybe nuke test gone bad with a big kaboom? Ruskies had just one recently, and it’s only matter of time when it happens again in Putin’s or Jingping’s commieland. And the West has become toothless and sissified, bending to insane will of both domestic and foreign tyrants, too dependent on disposable fun produced by filthy, murderous system and corrupt connections of uncontrolled globalization.

The time has come to overlook many things that have been falsely considered appropriate for years. It’s time to bring industries back home. It’s time to stop being dependent on authoritarian, thuggish countries. It’s time to show them where they really belong. It’s time to call things with their true names, regardless of how loud leftists and Kremlin/Chicom trolls are crying.

If you are one of my long-term followers, you should remember Comrade Brickhead (if not, you should definitely see him).

Now there’s another Darwin award winner from the land of eternal commie scum – a Donbass terrorist who tried to make some drunk ballistic experiments with his new goodies from Putin’s “humanitarian aid”. And so the world has another terrorist less, and Donbass terrorists another example to follow.

Being in terrible need of personal rating boost after total failure of his world domination escapades, KGB thug Putin decided to pull his favorite trick – just like in `99 when his goons bombed apartment blocks in Moscow to start a genocide war in Chechnya and justify restoration of GULAG state. But it would be a grave mistake to call Putin (who remains a small-time street thug despite his presidential status) a forerunner here because terrorism has always been a cornerstone of communism, the most perverse and corrupt ideology which he openly admires and tries to reanimate. 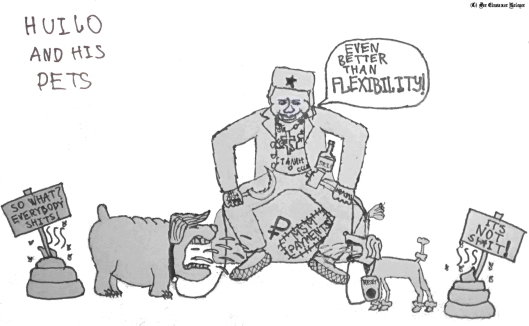 Not every ruskie can create a worldwide network of  neo-soviet outlets erupting anti-Western BS 24/7. Let alone become a buddy of KGB top dog and launder millions of Gazprom dollars. Mikhail Lesin who succeeded in all that can be considered a true example for all genuine patriots of Russia.

But his most patriotic deed was to relocate dirty money and children of similar moral character to the very country that his RTBS corporation was threatening to “turn into radioactive ashes” and labeling as “immoral”, come there in person and die. In a “gay friendly” hotel. In a district very popular amongst local homosexuals.

Seriously, even the Clinton-worshiping liberals couldn’t surpass ruskies in hypocrisy.

It’s impossible to explain the most simple things to libtards. Like fact that one-way friendship with thugs has a common simple name “A Very Stupid Way To Be Whacked”. I doubt that the following video of russian kids training to say their thanks to Obama will CHANGE anything, but at least it can provide some entertainment. “Liberal vs. harsh truth” is an amusing performance indeed!

That little brat at 0:16 did a really impressive attempt. I almost see him protecting mother Russia at the battlefield, aflare in a blaze of glory from RGD-5 that went off in his pants.

Why so shy, Great Wise Reset worshipers? I remember you getting all apeshit about my “Nazi russophobic” Website. Don’t want to get traditional russian gratitude for kissing their commie ass, do you?

Ruskies are happy nation indeed. The enormous boost of happiness caused by thuggery in Crimea grows even more as russian asshole leader continues to please his serfs. Who still need to eat something, especially having a new shithouse in size of Crimea.

The best thing to do being low on food stock and high on morale is traditional russian feast – of course, organized by wise and generous administration. Like shovel pancakes.

Free stuff is never free enough without crushing each other. Survivors can boast how spiritual they are, for eating a piece of free Easter cake.

To make Easter feast even more cheerful, russian priests have implemented a new tradition. Egg smacked right in the face is a true blessing for every genuine ruskie!

One and only true RTBS-English dictionary. No political correctness, no mainstream, no censorship or popular restrictions. With it, you will never feel lost even in a crowd of brainwashed RTBS junkies!

Calling duck a pig and hopping mad when someone says that pigs can’t fly.

The same as “Nazi thug” but of Ukrainian origin.

Any country a bit cleaner than russian shithole.

Complete denial of any human morality or law standards.

Annexation made by Russia.

Anyone who opposes Russia.

Anyone able to fight against russian invasion.

Agreement with some dumb Western politicians who end up like anyone trusting a thug – beaten, robbed and mocked.

Will to catch a bullet and be buried like a dog for own slavery and kingpin’s luxury existence. Or lose some limbs, return home and beg for change to buy vodka.

Protection of children (against homosexuals)

Reasonless invasion war, genocide of all non-putinists (including russians) by terrorism and thuggery.

Voting at the wrong end of AK barrel.

Persistence of “russian world” and personal safety of KGB asses.

Anyone who fights a guerrilla war against russian invaders.

Common russian activities (drinking cheap booze, whacking each other, sleeping in own drunken vomit and mating with drunk Natasha or drunk Emelya when there is no natasha available).

Anything approved by Putin’s dogs.

Ukrainians deserved reputation of humorous people not for nothing. Of course, as everyone else (except for russian serfs), they do not have endless patience but even when they get angry there can be something to laugh at. Or maybe take it as example, especially for EU where russian infiltration and corruption are often not better than in Ukraine, but still no sight of jolly guys to provide russian lackeys with unforgettable experience of unplanned trash diving – literally.

During less than two last weeks…

1. Treacherous “ex-” party of regions activist Grushevsky had a close trash encounter after facing the evidence of his own dirty deeds recovered from Yanukovich’s stronghold;

2. Yanukovich’s lackey Pilipishin got a face full of red paint and was thrown where he belongs;

3. Anti-Maidan deputy Zhuravsky was shoved into dumpster right near the Ukrainian Rada;

5. There were no dumpsters nearby, so guys just whacked another russian lackey.

7. If commie trash doesn’t want to come to the dumpster, it can be delivered right to the spot.

Looks like there’s much more to come. Way to go, Ukraine! Next time, it would be better to chain up those dumpsters and send them back to Russia where subhuman waste belongs!

Another usual BS of russian thug dictator, terrorist Putin gathered a common horde of serfs, always ready to kiss his commie ass. But some birdie (0:13) obviously couldn’t stand it anymore.

Very appealing moment indeed. Especially for those dumbasses who were praising KGB thug for his hunting, fishing, taming flocking etc. (staged as everything else) in the wild.

Does it really matter? Russian dictator is a walking bag of commie shit anyway.