Once upon a time, when visiting the German graveyard was still allowed for everyone, I was walking one quiet alley in my Gothic thoughts, until my way suddenly was interrupted.

I stopped and stared on the empty ground next to a well-known devastated crypt in disbelief. I clearly remembered that there were several ancient tombstones of different shape and size standing very close and a bit of chaotic, one of them turned over and sank to its surface, some vandalized, some untouched… but now all of them were missing. Instead of them, there was plain ground prepared for new burials, reserved for future. All ancient tombstones were gone.

This was my last visit on the graveyard at summer 2008, which triggered my mind into reconsidering of what I’ve seen. Loose and chaotic events became evident, revealing all the essence of unholy russian plan.

Later I was not even allowed to enter here. But I saw enough to make a conclusion. Deliberate intentions of russians to conceal and forge their crimes only helped to reveal them.

Bribed and rotten to the bone, the administration seizes graves from deceased ones, throws the remains away – and sells the ground to some rich subhuman kingpins. Ugly, disgusting huge “memorials” with criminal’s faces all over the stone appearing far and wide, mostly in places of graveyard considered “noticeable” – main alleys, crossroads, ancient areas. Those places are always occupied by other graves, but for russian untermensch this is not a problem. Having zero tolerance of living man’ dignity, they treat dead ones with the same humiliation. Offspring of communist brutes, they have absolutely no moral or spiritual codex forbidding things, which any civilized man won’t even think about. For rote untermensch, it is absolutely normal to devastate the grave and place corpses of their criminal “tzars” in this desecrated ground, which once was someone’s place of eternal rest.

To conceal their unholy crimes they put a loyal “watchdog” that prevents “unwanted” people from enter. True Goths are best witnesses of any change amongst surrounding of graveyard well-known to them; no true Goth will leave unattended disappearing of a single grave.

Or other things hard to miss: piles of trash, which workers intentionally leave on abandoned graves, collecting there all the garbage from nearby areas; or moved ancient tombstones, prepared for destroying; or desecrated crypt turned into inventory storage by workers.

In the previous post, I was speaking about equality of vandals and administration. No matter what uniform, social status and occupation russian subhuman has, he will find a way to express himself in abominations and desecration. The resemblance of russian street riffraff, officials and workers demonstrates that once more.

I remember everything I saw there and I won’t let this evidence fade away into the shroud of lies. Despite the foul russian plan, things won’t be forgotten. When the unholy land of eternal commies will fall, we the victors will show no mercy to red bastards who don’t deserve even a burial. The roadside gallows will be the only place for them.

Russians are famous with desecration of graveyards and Churches. But it would be a grave mistake to consider it a temporary madness of soviet era, as well as eternal communist mentality of russian scum. I’ll tell you about one of most beautiful and ancient graveyards in Moscow – German, or Vvedenskoe Graveyard. After partially surviving the soviet desecration, it’s being slowly destroyed by russian criminals now. After somewhat about 20 years of “perestroyka” and following chaos, russians decided to remember their unholy traditions and continue their foul deeds here.

One day I came to the place as usual – to have a Gothic rest from daily crooked life, be fascinated by beauty of ancient memorials and fell whatever a true Goth (those who know will understand) can have in several-centuries old graveyard, but this was my last visit here. Since the autumn of 2009, I was not able to enter there anymore.

Right near the gate uniformed security watchdog blocked my way and barked that I am not allowed to enter wearing Gothic attire, no matter what I am intended to do here (even visit graves I need to. Even having distant relatives buried here); and I must to take it off to be allowed to enter. Giving the bastard no pleasure of obedience, I turned around and left.

Firstly I thought it was typical russian way of thinking – use no brains, make restrictions for honest people, but allow everything for criminals. Bark at people as mad dog, but lick foot of brutes. Well, it could have been absolutely true, if the cemetery was not as famous as Vvedenskoe.

I remembered about things I had seen recently, and I knew they were not coincidental. An organized crime is the only name for them.

I speak not about crimes of vandal scumbags here. The administration of Vvedenskoe graveyard is absolutely careless about vandalism and unholy dark satanist acts which became a tradition here. There are no guards at night; so brave at daylight, they afraid even shove their nose out of the office building when they must patrol alleys. Anyone who wants can climb over the fence and do whatever they want, while gates are closed. Only the blind can’t see the proof – more and more graves and crypts vandalized with each new week.

I didn’t manage to make my own photos here so I’ll tell about some noticeable places by pictures found somewhere in russian Internet.

This tomb once was a beautiful ephemeral building made of glass and metal. City legends say that it was desecrated by Satanists and burned down during the attempt, leaving some of perpetrators out of their minds. Don’t know about the last part of story, but the fact is before you. Somebody tried to block the access inside with metal sheets and chains, but they were broken soon, leaving an access open to all kinds of scum. Mutilated birds which appear here mark the regular presence of “dark Satanists”. 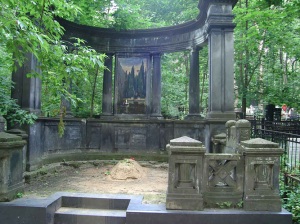 A very interesting family plot, featuring a mosaic picture of the Styx River. Some russian bastards stoned it in several places.

View through the window of roofless tomb.

In Russia, there are two threats to graveyards. I just spoke about first one; individuals with no brains, zero intellect but full of aggression and will to showoff. Wannabe-badass satanists, killers of small animals and birds. Cowards in nature, they prefer to hurt deceased people. The only place suitable for them is the noose on nearby tree.

Second threat is much worse. They are mostly same to the first group, but the significant difference is a little more of brains. Enough for deciding that vandalism could have been turned into kind of business.

For concealing their crimes from public knowledge, they placed a watchdog near gates – russian kolkhoznik imbecile, which guards entrance only from those who are completely innocent.

How exactly russians do their dirtiest money from graveyards vandalism? Next post in this topic will explain that.