This is an official statement of Dr. Sergei Melnikoff regarding current events in Riga.

I draw the attention of the U.S. Central Intelligence Agency, the Council of Europe, the Constitution Protection Bureau of the Republic of Latvia, as well as other competent bodies, on the following circumstances and persons, whose activities are aimed at undermining of the constitutional order in Latvia and in general, creation of unstable situation in entire Baltic region for benefits of Russia that is currently conducting a policy of open military and economic aggression.

Russian fifth column and its leaders in Riga joined their efforts in a choir against the international project “The People of Maidan” and its land of birth – the free Ukraine. Analysis of open sources allows to find with a high degree of reliability that this war against an international project has been coordinated by the Mayor of Riga Nil Ushakov and Modest Kolerov, the latter now living and acting under the pseudonym “Mike Collier”.

Mike Collier, or Modest Kolerov (his real name is hidden in the depths of FSB, whose director Mr. Patrushev was secretly awarded by “hero of Russia” title for murdering children in Beslan with flamethrowers and involved in bombing of sleeping apartment blocks in Moscow) in August 2012 was declared a persona non grata in Latvia due to “threat to the territorial integrity and economic security”. Before that, he was banned to enter Lithuania, Estonia and Georgia. But today this Russian emissary is roaming around the EU carelessly after losing some weight and pulling a cap over his eyes. Simple anthropometric study of Mike Collier’s and Modest Koverov’s portrait photos shows that it is the same person. It’s purely rhetorical question who helped a russian spy to return to Riga under slightly changed name, without even caring to alter physical appearance significantly. 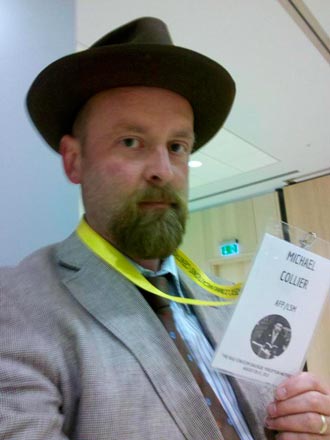 Actions of Ushakov and Collier are coordinated with hundreds of media outlets not only in Latvia. Analysis of open sources reveals the existence of entire tree-structured network of russian-speaking media on Latvian territory, entirely controlled by hostile Russia. During my conversations with advisors in Riga on the possible purchase of “Baltkom” radio station I was told openly and directly about existence of such network and its purpose to prepare the people for “X” hour, should the “unexpected” invasion of Russian troops take place on the territory of Latvia. Constantly repeated surname “Ushakov” indicated complete lack of any attempts to conceal the actions of the Mayor of Riga, exceptionally beneficial for russian intelligence and thieves-oligarchs of this country.

Media attacks on Ukraine and socially significant projects dedicated to development of friendly relations between Ukraine and EU countries (in particular with the Republic of Latvia, like “The People of Maidan” project) are closely administrated by Ushakov-Coller group, Russian embassy in Latvia and FSB spy residents in Riga together with all more or less significant media outlets of the Russian Federation.

Hundreds of articles with groundless accusations of Ukrainian project and a series of attacks committed by so-called “vandals” right next to Latvian Cabinet of Ministers must cause deep concern not only of the supreme government bodies of the Republic of Latvia, but also of the Council of Europe, where a demonstration of “The people of Maidan” is planned.

All efforts to discredit the Government, the Seimas and the Ministry of Foreign Affairs of Republic of Latvia, skillfully directed by Ushakov-Coller tandem with using of the dirtiest tricks in Russian-controlled mass media, must receive competent and comprehensive assessment.

This official statement and analytical note with factual materials are being sent by me to government and counter-intelligence authorities of the Republic of Latvia, the United States and the Council of Europe.

Author of the global exhibition project “The People of Maidan”