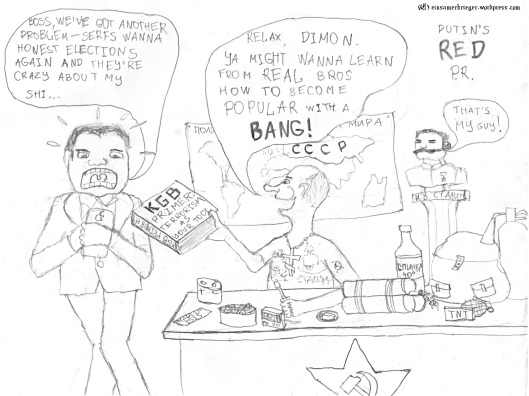 Being in terrible need of personal rating boost after total failure of his world domination escapades, KGB thug Putin decided to pull his favorite trick – just like in `99 when his goons bombed apartment blocks in Moscow to start a genocide war in Chechnya and justify restoration of GULAG state. But it would be a grave mistake to call Putin (who remains a small-time street thug despite his presidential status) a forerunner here because terrorism has always been a cornerstone of communism, the most perverse and corrupt ideology which he openly admires and tries to reanimate.

Along with his long-term manic russophilia, Obama demonstrated harsh intentions to be just like his master, KGB brute Putin who has elections just because of political fashion (being an exposed dictator became untrendy) and with results known even before those elections take place.

“This is my last election. After my election, I will have more flexibility” – said this russian lackey Obama in his tête-à-tête with Medvedev, speaking about anti-missile defense. (Source: The Washington Post) 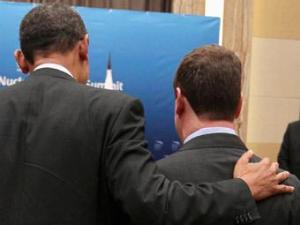 I wonder what methods he is going to use with such self-confidence? Amongst of all tricks he learned from his neo-communist masters, together with voting forgery will be there neo-soviet repressions and police brutality also?

With “flexibility”, Obama is going to continue destruction of his own country, doing everything to pleasure of russian dictators, betraying his nation.

Even without this exposure, Obama’s commie essence is hard to miss. One does not need artistic imagination to see in his mind’s eye what will happen to the “most democratic” country in the world if lackey of russian dictators will be allowed to have his treacherous power over it again for next four years.