It’s May out there, and May means total madness in terroRussia that celebrates the victory of GULAG serfdom and commie shit. To continue my tradition of slaying russian sacred cows, I’ve translated another article written long time ago (but relevant nevertheless) by Andreas von Ossen.

Ruskies always had a problem with maths. To be perfectly clear, with two of its basic actions – addition and multiplication, the basis of creation. Not like with taking away and dividing, which they mastered by robbing others. And what a fool would steal from the poor? So Ivans were pirating in the Baltic waters coveting the wealth of Europe, Germany, Sweden and Hansea merchants. They’ve managed to steal even the gates of Sigtuna, likely being too lazy to drag them all the way towards Moscow, and celebrated their fortunate looting by old tradition of hitting on booze (while the Vikings were discovering America). And razed Sigtuna to the ground, having a bloody feast there. Ruins of the city can be visited even now.

The mills of God grind slowly, but they grind exceedingly small. And on December 1, 1255, the Teutonic Order has founded the fortress Koenigsberg to protect the Baltic trade routes from Novgorod pirates and peaceful labor of the Baltic peoples from the Tatar hordes of “holy” morza Alexander Nevsky. From the bloody feasts of robbers and rapists. Christianizing the natives of Prussia, pagans and cannibals, with the power of cross, fire and sword.

So the rest and peace were enforced in Europe by the brotherhood of Teutonic knights. Neither ruskies nor Tatars did look for new ways to Europe anymore, being afraid of a blow from the northern flank. However, the Königsberg made russian tzars upset as they always were greedy up to another’s goods. Not without reason it was named by Otto von Bismarck “a pistol pointed at Russia’s temple”. Russian attempts to seize it continued until days of Friedrich the Great and even later – in the First World War. In August 1914, russian army general Aleksandr Samsonov was taught a lesson not to make bloody feasts on neighbor’s land. So hard that the poor thing had to shoot himself. Back them trounced russian generals wrote no memoirs, unlike in WW2. When, by the way, Stalin’s lackey Ivan Chernyakhovsky (famous with his treacherous butchering of Polish Resistance fighters – NvS) got his reward of hot lead in the same place.

For the time before ruskies became too impudent, the land of work and culture – a province of East Prussia – prospered under the reign of Germany. It had its own black-and-white flag, COA with an eagle and anthem. It was the national granary that could provide food for the entire Germany. 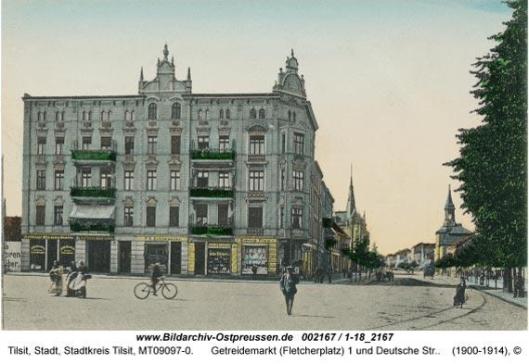 Good roads, clean farmyards, rich harvests – everything there was a reproach for ruskies who always had an excuse for their loafing: bad weather, too much booze, and so on…

The land of East Prussia is full of legends – one of them is a Stone of Lie that has crushed sailor’s cheating bride. No liar can pass between its two parts. It would be nice to shove Putin and Medvedev in there…

Also there was a beer restaurant named Blutgericht in the castle of Königsberg – known in the entire Europe. One could have a good beer there – not like now…

The fatal mistake was made by Adolf Hitler – Molotov-Ribbentrop pact (its most simple and revealing explanation was made by Soviet GRU defector Victor Suvorov – NvS). The contract with Russia is a contract with the devil. All its benefits turn into bane. Russian oil (and now gas as well), the strategic resources, a wood, nonferrous metals seemed a manna from Heaven for Germany, subjected to economic blockade. But it has been told a long time ago – beware of Greeks bearing gifts. And as a result, unbidden ruskies came to celebrate their bloody feast of cannibals. 17-years-old boys were chaining themselves to guns demonstrating their resolve to fight until the end. And they did it indeed. Unfortunately, Mongoloids were too large in numbers…

My deceased father once told a story. In late May of 1945, after the German capitulation already, ruskies were waiting for the train back home at Königsberg railroad station – unarmed, but with loads of stolen goods. Suddenly a young guy, about 15-16 years old, stood upright on a slowly passing cargo train, wearing SS General uniform (which he most likely borrowed, being too young for such a rank) with MG42 machinegun in his hands. He managed to mow down almost everyone on the station before being killed. It’s hard to imagine a better death for the real man. Long live the heroes of our land!

The Potsdam conference has ordered to pass this land under “temporary” control of the USSR and Poland. Without mentioning exact time. Part of it has been passed by the USSR to Lithuania. But if both Lithuania and Poland are parts of the united Europe now, about half of East Prussia still remains under the feet of russian anti-human mockery of a civilization. On photos below, you can see the remains of their bloody feast. Everything is in ruins. There is no sight of farming – of all livestock, there are only Russian swines. 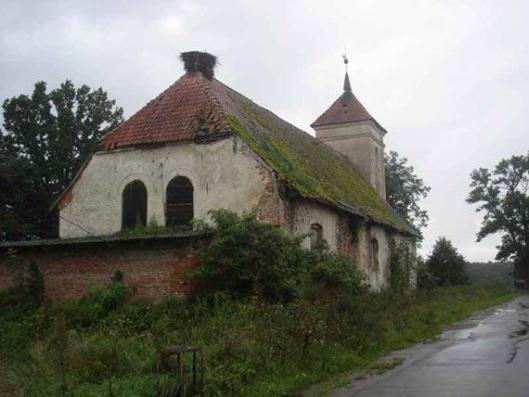 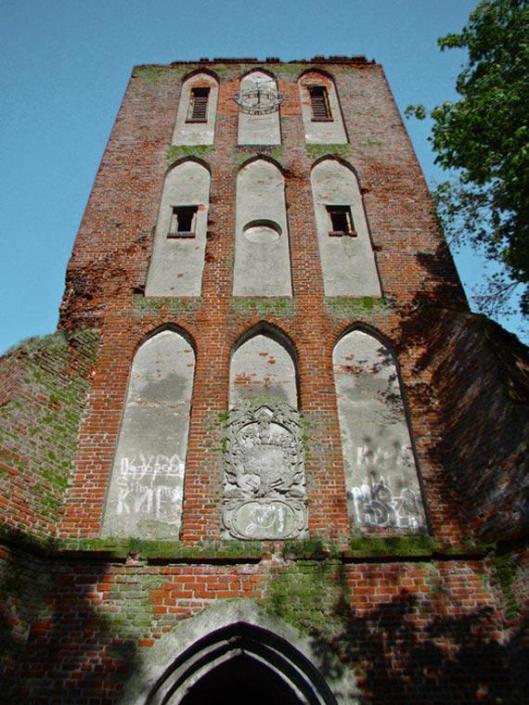 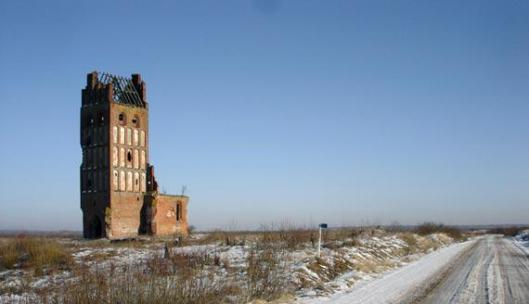 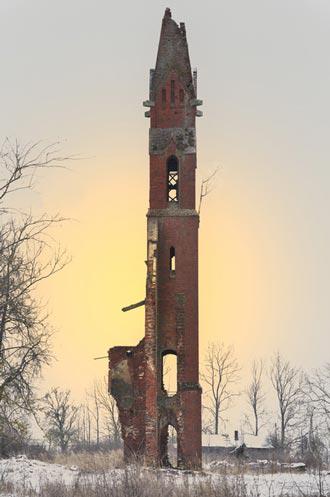 And even those ruins of Lutheran and Catholic churches that never had any relations to russian “Orthodox” sect are being seized and desecrated by goons of “patriarch” Gundyaev whose lust to steal is insatiable. Rob everything in sight and then think what to do with the loot – that’s the first and only commandment of their “church”, and russian national idea as well. I believe that revived Holy Inquisition will make them repent.

People say, on the eve of May, 1st and on November, 9th one can hear eerie sounds of parading German troops in destroyed fortresses of Königsberg. And see writings on walls of cellars and catacombs (which are mostly flooded, obstructed by sand and remain unexplored): “Wir gehen, aber kommen wieder!” (We go, but we shall return!)

There was a big scandal in 1985, when ruskies celebrated the 40th anniversary of their victory. Having a late order to tide up one of their barracks (German built), soldiers hastily removed a rusted-out Soviet propaganda poster with some border guard and his loyal dog, getting the job finished in the dark already. The next morning on May, 9th commies were shocked by a sight of German poster, just slightly dull from an old age, showing the soldier in a Stahlhelm under a banner with swastika and motto “Am Ende steht der Sieg!” – In the end there is a Victory!

In 21st century, East Prussia remains one of last European lands usurped by ruskies. Let it will serve as the warning to all politicians who are hoping to befriend Russia – here is what your countries will be turned into. You want it? You wish to repeat Hitler’s mistakes? You want to become his followers? Ruskies will have a great pleasure making a bloody, red feast on your land, and completely no regrets!

And we the fellow countrymen of East Prussia shall not cease our fight for return of our ancestral land to the German home.

AWAY WITH RUSSIAN INVADERS!